Festulolium is one of the great success stories of our grass-breeding programme. Years of experience and know-how have produced a portfolio of varieties that are proving useful across the world.

The detail of these characteristics depends on the proportions of parental material. In every case, however, the individual variety will be more like one or other of the two parental plant types. As a result we can categorise festulolium into two types – tall fescue and ryegrass types – determined according to their broad characteristics and phenotypic appearance.

The fescue types tend to have a high dry-matter yield, good tolerance to cold and drought, and an overall high persistency. In contrast, the ryegrass types offer rapid establishment, spring growth, a high sugar content, and good digestibility and palatability.

These festulolium varieties resemble tall fescue morphologically and in terms of cultivation. In performance, however, they're a huge improvement. The added-value qualities of tall fescue types bred by DLF are:

Tall fescue types have inherited the deep root system and drought-tolerance of tall fescue and the high yield and digestibility of ryegrass. The result is a persistent, high-yielding grass for more challenging conditions.

When you put a tall fescue type festulolium in a seed mixture instead of tall fescue, you grow a grass with higher digestibility, which increases your feed intake and gives your more milk or meat. 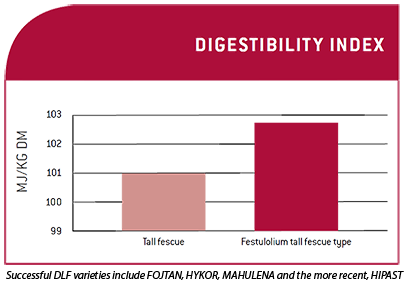 These festulolium varieties resemble ryegrass morphologically and in terms of cultivation. However, they're an improvement on their parents in a variety of ways:

Ryegrass types have inherited the high yield, digestibility, and comprehensive root system of Italian ryegrass and the high persistency of meadow fescue.

The fast spring growth of ryegrass type festulolium is a good reason to use it in a seed mixture instead of ryegrass or hybrid ryegrass. With this festulolium type you can harvest 60% of your total annual yield in the first and second cuts.

Ryegrass types give you a high yield and good persistency. Official trials undertaken in Denmark show how the yield improves year-on-year compared to perennial ryegrass. 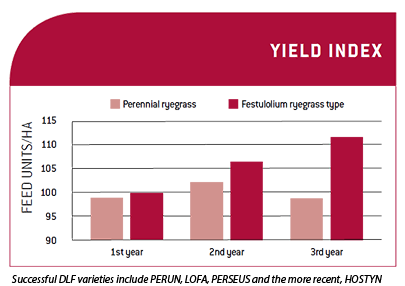 The broad genetic qualities of festuloliums make them suitable for a wide range of growing conditions and a variety of forage-production systems.

Growing alfalfa and festulolium could give you a 10% improvement in your dry-matter yield compared to combinations of alfalfa and timothy or alfalfa and meadow fescue.

Festulolium also works well in combination with many other species, including clover, annual and perennial ryegrasses, orchard grass, tall fescue, timothy, and bromes.


Learn more about using festulolium to improve your forage

To find out how the various types of festulolium could improve your production and income, speak to your local DLF seed dealer.