Soybean production is wearing it’s big boy shoes – you can tell from the footprint it leaves on the climate and the environment. However, there may be another way of getting the much-wanted protein from your own production in a much more sustainable manner. The source is alfalfa – one of the world’s most widely grown forage crops. Under normal conditions alfalfa can easily produce 12 metric tons of dry matter per ha. of which 25 % is extractable protein (3.000 kg/ha). It is a sustainable crop with its own nitrogen fixation and it has profound effects on soil structure improvement. Thus, the need for deep tilling is reduced, which means the release of CO2 and nitrogen oxides is far less than that of soybean. 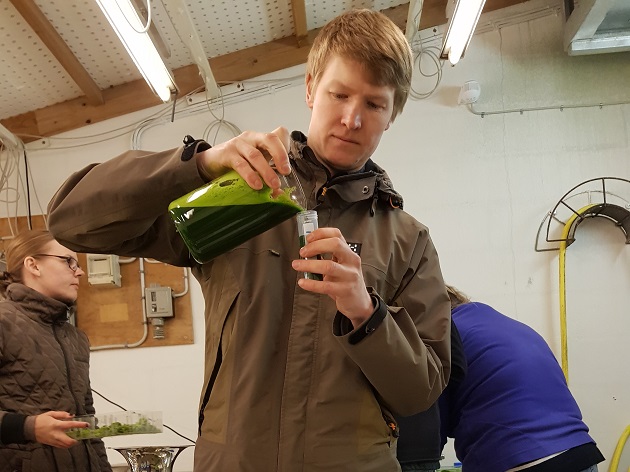 In a Danish research project headed by DLF, scientists are now investigating, which alfalfa lines contain most extractable protein and how to squeeze as much protein out of the crop as possible. The project is called AlfaMax Bioraf and in May the first lab-scale protein extractions were made on 30 genetically different alfalfa lines. Proteins are extracted by juicing fresh plant material. Heating up the beautiful green protein juice to more than 80 °C causes the proteins to precipitate. Precipitated proteins can then be collected by centrifugation and the rest of the juice can be used in fermentation tanks for biogas production. Left-over pulp is also usable as fodder for ruminants.

Watch the following video, on how to make juice from fresh plant material:

At this time there is a good business case for organic farmers, who wish to be less dependent on expensive organic soybean. One of the project’s goals is to optimize the process, in order to be competitive with conventional soy production. The project has five partners: Aarhus- and Copenhagen Universities, who will study process optimization; Alfa Laval and SiccaDania, who will provide expertise on industrial scale processing, and DLF, who is delivering alfalfa lines. It runs over three years and receives financial support from GUDP. Read more here.