The global seeds group reported a revenue of DKK 3.527bn (€473m), which was in line with the previous year.

The strong operating result was effected by a strong sales effort combined with prudent production planning. Following a large over-crop for harvest 2015, the seed multiplication acreages of forage and turf seed were reduced in 2016. Consequently, inventories were been reduced, which in turn contributed to a strong cash flow in the Group of DKK 223m (€30m).

CEO Truels Damsgaard points to several explanations to the financial result. "The result is achieved through a solid effort across all our Group Companies. Our customers are increasingly demanding products ready for sale when they leave DLF’s seed packing facilities. Sales of ready for sale products has grown by 28% in two years. Strategically, it is highly satisfactory, that sales of ready-made seed mixtures have increased more than sales in general.”

DLF presented the financial result 2016/17 at the Group's Annual General Meeting on October 31. Find more information about DLF in the business report, “We turn science into growth 2016/17” 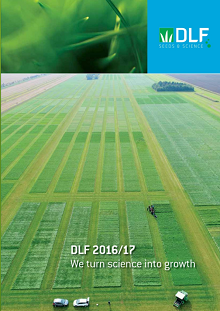