New CFO in the DLF Group

After 25 years in the DLF Group, CFO Morten Andersen has decided to retire at the end of this year. His successor will be Allan Bødskov Andersen who will join DLF on 1 September 2022 and on 1 November will take over the position as CFO and become a member of the Executive Board at DLF. 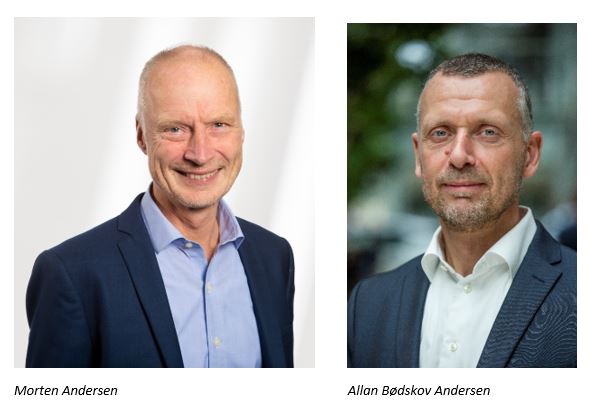 Since 1997, Morten Andersen has been at the head of DLF's Finance and IT functions, where he has managed the Group's finances with a a steady hand and has taken part in the strategic and commercial development of DLF. He has built solid reporting routines and a global IT platform which are important tools that ensure transparency and provide a good overview of the Group's numerous companies and activities around the world.

Morten Andersen has decided that the "hour of reckoning" has now come, and he will step down from the position as CFO on 1 November, shortly after DLF's General Assembly, which will take place on 25 October.
- It has been exciting to take part in driving DLF's development, and I am very happy to be able to hand over the chair to Allan Bødskov Andersen. I am sure that he will be a great asset to DLF together with the strong team we have in the finance department, and that he can contribute to the company's continued development, says Morten Andersen.

Allan Bødskov Andersen comes from a position as CFO Onshore at Ørsted A/S, where he has been employed in the finance division since 2006. Most recently, he has had CFO responsibility for the Group's onshore activities such as wind and solar energy as well as energy storage projects in Europe and the USA, and in addition, he has been in charge of the group's investor relations. Allan Bødskov Andersen is Master of Science (MSc) in Economics and holds a PhD in Finance from Aarhus University.

Allan Bødskov Andersen is looking forward to taking up his new job.
- I come from a company with a lot of green energy and DLF is a solid and fundamentally sound company and a locomotive within green products. DLF has had an impressive growth journey and is very strongly positioned on the world map, and I look forward to helping shape the development in the years to come.