Truels Damsgaard, CEO of DLF, received the award for "The year's performance" on Growth Conference 2016, organized by Danish agricultural media "Landbrugsavisen", for being the strategist who has secured Danish seed production worldwide success

"Thank you for the award, it makes me really happy to win this. It's not just my award, but also all the skilled and engaged people who are employed in DLF. And not least, the Danish seed growers who are in the seed business for the long perspective with a far-sighted vision, "said Truels Damsgaard and thanked for the price at the Growth Conference.
In his justification that Truels Damsgaard earned the price, said Jan Beck Mikkelsen, Sales Manager of Gjensidige, that Damsgaard personally enjoys great respect among both farmers, customers and employees.

"You have as CEO of DLF managed to developing DLF continuously through engagement, focus and foresight in a way, that DLF today is a well respected and strong brand - and a market leader in your field," said Jan Beck Mikkelsen and added, "DLF has also - under your leadership, and with you as a frontrunner - managed to brand Denmark worldwide and place Denmark on the World map - latest by being the supplier of turf grass seed for the World Cup in Brazil, for the pitches at the Olympics in Rio and the Super Bowl. "

Read more about the award ceremony in Landbrugsavisen (Danish) 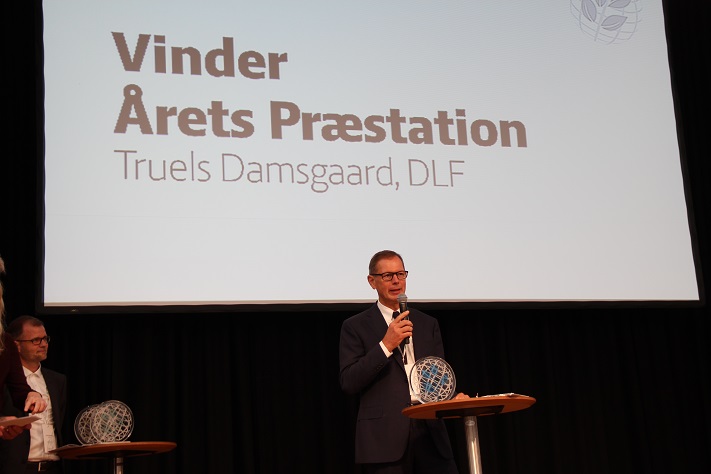