This year's Roskilde Festival has begun. The wear of thousands of happy, dancing and bouncing festival guests is tough on the grass on both the camping and the festival site.

The grass at the campsite is not only to endure the many festival guests - it must also be sustainable. For environmental reasons, it is not allowed to fertilise the grass grown at the festival area. Hence, the organisers have established a Masterline Ecomaster mixture at the camping site. DLF's sales consultant Søren Drejer Jensen says: "What makes the Masterline Ecomaster absolutely brilliant for the camping site is the tiny Microclover® that captures nitrogen from the air and convert it into fertiliser and spoonfeeds the grass and makes it stronger." Microclover® enforces the grass mixture, making it stronger for the encounter with the many festival guests. 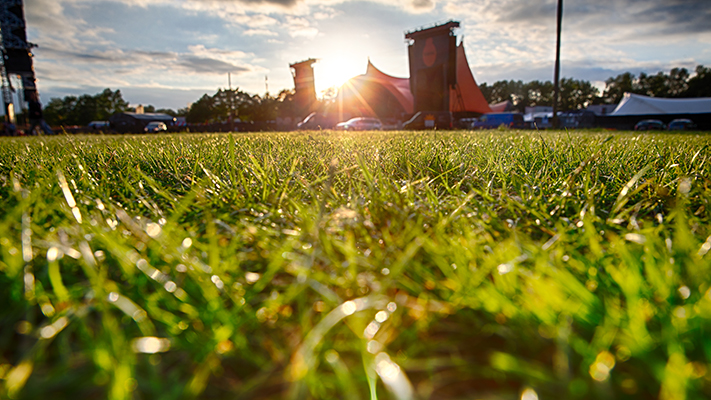 The festival site itself has been prepared similar to last year with the Masterline Expressmaster grass mixture. It is composed of strong diploid and 4turf® varieties of turf perennial ryegrass. The mixture has a composition that withstands the wear from football matches in major stadiums, making it the best mixture for a heavily loaded areas like the festival site. Similar to last year, the site will be overseeded with Masterline Expressmaster when the festival is successfully over - making Roskilde ready for next summer's events.