can withstand really tough use. 4turf® is a range of perennial ryegrass varieties, developed to be strong, deep-rooting, and tolerant of stress.

For our R&D teams, perennial ryegrass (a widely used lawn species) was an excellent starting point. The species establishes fast and is known for its wear-tolerance. 4turf® technology makes a great turf grass even better.

By describing 4turf® as stress-tolerant, we mean that it is better able to withstand a range of unfavourable conditions, such as biotic and abiotic factors.

The strength of 4turf® plants is obvious right from the start. Seeds kick off faster, even at lower temperatures. They grow into stronger seedlings that help to cover the ground faster without suffocating the other species in your mixture.

That's why 4turf® improves any lawn mixture, whether it's for a new lawn or the repair of an existing one. 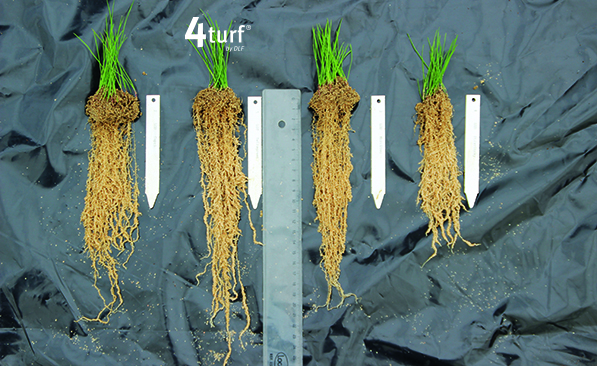 4turf® is a new turf-type, tetraploid perennial ryegrass developed by DLF. The tetraploids were originally found in forage, but DLF were the first movers in developing it for turf grass, putting DLF in the forefront of breeding turf grass. This enhanced turf grass germinates faster than traditional perennial ryegrass. It offers unique stress tolerance together with fast and strong establishment at soil temperatures as low as 3–5°C.

4turf® gives you green ground cover during the most difficult period of the year. It's more tolerant of drought, and during the autumn and winter seasons, it shows improved tolerance to diseases such as fusarium and red thread.

The science that makes 4turf® so effective

In its natural state, perennial ryegrass is diploid: it has two sets of chromosomes. By using a natural substance, our R&D teams have developed tetraploid varieties (four sets of chromosomes). The route to tetraploidy is long because first-generation plants produce a mixture of diploid and tetraploid shoots within the same plant. To obtain plants that are 100% tetraploid, we have to go through a series of selections of individual shoots.

Each step is tricky too. We have to count the number of chromosomes on each shoot so we can pick out the tetraploid ones. Since perennial ryegrass is an outbreeding species, a single plant is not enough to create a variety. We need several to make a population that avoids inbreeding depression. And we have to prove that our selected tetraploid shoots perform better than their corresponding diploids.

This is where the success of our research programme is outstanding. Standard tetraploid forage varieties are much courser, exhibiting more open and abundant growth than diploids. However, our 4turf® varieties are comparable to some of the best diploids. They're fine with very good density and short growth.

For more information on the 4turf® story, see our 4turf® brochure and the ambitious research project RadiMax concerning root development.